Today I did something many people, men and women, find scary: I spoke up….to a stranger… about sexism.

Now to me, it’s easier to speak up to people you know about hot topics because you know how to talk to them and how they are likely to react. It’s the everyday encounters with strangers that terrify me. What if they get offended? What if they get mad? What if they get in my face about it? Could I stand my ground? Could I take the very public, possibly negative, attention? All these questions and more usually make me not want to speak up when faced with the kind of situation I was in today.

I decided to take an Uber pool to my destination. The (male) driver was polite and friendly, a great person to have when I was out at 7am when my usual wake up time is 8:30/9am. On the way we picked up another (male) passenger who was a driver for another private company. During the normal conversation of how are you doing, how long have you been driving, etc the other passenger asked if our Uber driver worked nights. His response was that he didn’t because he wanted to avoid any problem customers who, due to indulging too much, might get sick or violent, damage his car or distract him from driving. We all joked a little about how some people just don’t know where to draw the line and how dangerous it can be for everyone involved, regardless of gender.

The other passenger then brought up how he would be concerned of passengers making allegations about him saying, “what if you picked up a woman and she says you tried something on her or something? Arn’t you concerned about that?” and then pointed out how having camera in the car would be a good idea. The driver laughed and said he never had anything like that happen but again, he doesn’t work those hours.

That’s when I got kinda quiet.

Hint: When I get quiet, something is usually wrong.

The driver then asked about different kinds of cameras and what if someone tried to break the camera, where would the footage go etc. After recently talking about car cam’s with my husband i was able to contribute some answers but again the passenger brought up the point that having one would be good in case some “girls get out of control”. Our driver made a note that a camera seems like it would be beneficial for everyone, passengers included.

At this point many questions had crossed my mind about if i should say something? If i should bring up that there are far more real assault accusations than false ones and that girls arn’t the only people who can “lose control”. It was then that the other passenger brought up See Jane Go, a female only ride-sharing service and how he thought it was unfair, didn’t understand the need, and hopes they get sued. The driver noted he didn’t have a problem but agreed that he didn’t see the need.

YUP, time to step in.

Personally i think we need to stand up to the small sexism’s we see everyday , intentional or not, far more than the screaming obnoxious ones because it’s the small details that make the difference.

It was then that I brought up how many women, including myself feel unsafe in situations where we are with a male stranger, particularly in a confined area. Not to mention that this person might be driving you to your house. My driver couldn’t understand why anyone would be so afraid unless something has happened to them.

Easy answer, I had this:

“Something bad doesn’t need to happen to you everyday for you to become more cautious of it. If you get in a really bad car accident, it might take a while before you feel fully comfortable driving and for an even longer time you might be a more cautious driver than you were before.”

Our driver was starting to get it and this time it was the other passengers turn to be quiet.

What a relief it was to see it slowly clicking in his head. I spoke up and it was making a difference! I continued on.

I told him of how a couple of times I had men follow me around, noted they had said they had seen me before (meaning they knew i was a regular in that area) to flirt/catcall me both while I was in college and recently. I explained that during those moments every woman asks herself “What if I do the wrong thing and this person gets aggressive? Or follows me home? Or what if they arn’t in their right mind? What will they do to ME?”
I explained the situations and the thoughts I remember having at the times (in more detail than I have explained in this blog). I also mentioned that statistically women arn’t as strong as men and that that is always a factor in our thought process.
And then told him my favorite sentence (#whovian reference):

“It’s not every man, but it can be any man” (#silenceinthelibrary) 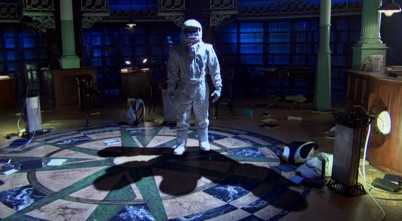 What he said me next was amazing:

“I guess I’ve never had to worry about things like that. I’ve never experienced anyone say anything like that to me before or follow me like that. Is it really that scary being a woman?”

We then talked about other small ways women get or feel threatened on a daily basis and how having a service where you have someone who is likely to know and understand the same struggles as you might be a relief. Especially when it comes to something as serious and impactful as personal safety. It’s not a solution but it’s a band-aid until we can get everyone on the same page.

When he dropped me off he thanked me for the great conversation and actually seemed like he took something away. I truly feel like he might think about his female passengers differently and maybe look at things a little differently now.

The other passenger? He was dropped off in silence back at the Silence in the Library reference.

Living outside the box in every way! Geek, poet, marketer, entrepreneur, gamer, painter, lover of children and animals!

← Gifts that work for anyone! Poem: Caged →

Welcome to my site

Welcome to my somewhat cathartic blog! I post about business, marketing, nerdy-ness, video games, events, and general life in LA.