Sunset is a calm walking simulator that takes a simplistic approach on a complex topic with an artistic flare.

The main character, Angela Burnes, is the housekeeper to the wealthy businessman Gabriel Ortega. It takes place in during a revolution in San Bavón, Anchuria, Latin America in 1972. Each day Gabriel Ortega leaves a note with specific chores to carry out that day. You arrive an hour before sunset and have only that hour to navigate the apartment to complete your tasks before you must leave the property at sundown.

You play through Burns’s POV and 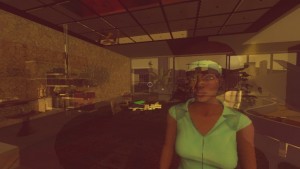 are only able to see her through her reflection. You also never see anyone else. Though as you patter through the apartment completing your chores you are able to communicate with Ortega through notes. Both of these yield results in achievements and in how the story progresses.

At first glance Sunset can seem like a simple and even boring game. (Especially if you are used to playing active battle or puzzle games.) However, the art lover in me, for both visual and literary, is absolutely entranced. To me, Sunset isn’t so much a walking simulator as it is an interactive visual novel.

Sunset does a fantastic job of showing us, not simply telling us, the story. It does this through Burnes’s commentary as well as changes in the environment. The story also reveals itself through the seemingly trivial tasks that subtlety impact the tense yet causal relationship between Burnes and Ortega.

Sunset is filled with these vast disparities and juxtapositions which seem to reflect the state of the country in the story. The differences between Burnes and Ortega for example. Burnes, opinionated and strong willed, came to San Bavón to further her education but is financially struggling so she takes a low-level housekeeping job. Meanwhile, Ortega is a wealthy and high-level government worker who refused to leave San Bavón though it is made clear he was given opportunities to do so. We are also told that Ortega seems to simply signs papers sent to him which implies his political indifference. Obviously, this is a stark contrast from the opinionated Burnes. In addition, we are playing through Burnes’s POV so while we are exposed to Burnes and her narrative a lot we only barely see signs of Ortega’s presence.

Then there is the environment we are placed in. The inside of the apartment is almost eerily serene while outside is essentially a war zone. The country of Anchuria is filled with the sights and sounds of revolution including jet engines, gunfire, and smoke. Meanwhile the apartment is quite with an echoing stillness. 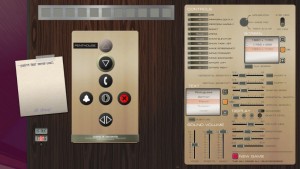 The game controls are probably as simple as you can get. You have your basic WASD for navigation with point and click for actions. However feel free to head to the options menu for a lovely display of all of the potential settings. Some of the more common settings you can play with are the brightness, contrast and sound levels.

Sunset doesn’t depict any violence or graphic nudity though it does have some minor language. To be honest, there is very little in Sunset that I think a parent might find objectionable. Despite this, I would still say Sunset is probably not a suitable game for kids or teenagers.

Sunsets’ environment is slow and calming despite that it is taking place during hostile times. I doubt that the simplicity of the actions allowed and the layout are interesting enough to hold the attention of a child or teenager. There simply isn’t the level of activity or active engagement most kids are seeking in a game.

Sunset is a beautifully designed game that exquisitely tells a story of the lives of our main character, her employer and the revolution in Anchuria. It’s elegantly simple style and controls make it easy on the eyes and relaxing to the mind as we go along for the ride with Burnes.

The only thing I can fault Sunset, and Tale of Tales, for is the price. At $20 on SteamSteam it is the most expensive game release that Tale of Tales has put out to date. With most of their other games ranging between $5-$10, Sunset seems like it may be more adequately priced at $10-$15. However overall I would give Sunset an 80/100.

Living outside the box in every way! Geek, poet, marketer, entrepreneur, gamer, painter, lover of children and animals!

Welcome to my site

Welcome to my somewhat cathartic blog! I post about business, marketing, nerdy-ness, video games, events, and general life in LA.